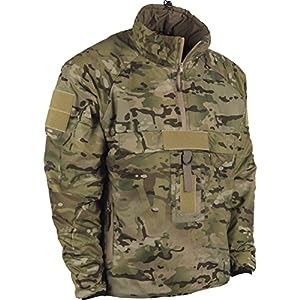 Developed by Snugpak with input from professional navigators, mountain leaders, climbing instructors, meteorological staff, and military personnel. The new functional Snugpak Military Mountain Leader Smock has been created to support the soldier in a diverse range of operational environments, when exposed to extreme cold weather, including Alpine walking, scrambling, rock climbing, Canadian Winters in BATUS, SERE training or completing infamous Norway skiing. Whether you are completing long range days, Reserve Weekend Training, deployed operations, or need an extra layer when called upon for that early morning stag, the Snugpak Military Mountain Leader (MML) Softie Smock has been created for you, for a diverse range of environments, terrain and weather The Snugpak MML Softie Smocks are ideal for a diverse range of operational environments, all year round, where the main environmental considerations are wind and cold weather, when thinner layers are insufficient to protect against the elements: HM Forces Reserve Forces Combined Cadet Forces Range Training Days Deployed Military Operations The Snugpak MML Softie Smock is a tri-layer garment and uses both Paratex Micro as a face fabric, and an internal Softie Premier fill, encapsulated with a Paratex Light lining. Designed to provide excellent thermal protection against the cold, as well as high protection against wind, the MML Softie Smock is available in a variety of Softie weights, for the following temperature ranges: MML3 (Softie 3) 0? to -5? MML6 (Softie 6) -5? to -10? The MML Softie Smock is lighter than normal expedition style jackets, and uses water resistant YKK zips, making it ideal for when size and weight need to be kept to an absolute minimum. It is ideally worn with a variety of base layers, such as the Snugpak 2nd Skinz Coolmax base layer, or issued UBACS, to move moisture away from the skin, keeping you dry and regulating core temperature in extremes of cold....

Crye Precision Multicam Extremely Lightweight & Durable, Perfect For When Weight And Space Need To Be Considered Made In The Uk. Support Uk Manufacturing And Enjoy Superior British Quality. Unisex Design Windproof: The Paratex Micro Fabric Protects You From Wind Chill